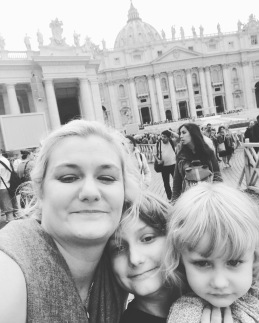 Last February I had the most random of emails. It was an email from the ED society asking us if we would like to go to Rome on behalf of the Uk society to meet the Pope with other ED families from across the world! Well that doesn’t happen very often does it???

Needless to say we jumped at the chance. To be honest I didn’t quiet believe it would happen and I don’t think anyone else we told believed us either…. I mean meet the pope? us ? really?

As the trip came closer we started receiving emails from the organiser of the trip in Italy, we were to all stay in a large hotel on the outskirts of Rome and there would be various social events happening. It all began to feel very real.

A month before we were due to depart I had an even more random email, I really didn’t think the former could be beaten but I was wrong. We were asked to bring a gift to present to the Pope. Yes… I know…. what on earth does one give to the most holiest man on earth? After much discussion and support I finally worked out what I as going to take..  Rev Shelagh ( our family vicar and friend) had advised how His holiness was very passionate about reaching out to those in need particularly at the time he was reaching out to the refugees.  I wanted to think about giving something symbolic and relevant to us as a family, having a link to the results of war as well as placing a human face to it.

I have an old case full of my grandfathers old letters, books and papers from his time fighting in the second world war and one of the items that came to my mind was his soldier book. The tiny leather bound book has a page at the front where he wrote out the lords prayer. The writing is beautiful and albeit faint it shows how important his faith was during this dangerous part of his life. I copied the page and printed it out, framing it with a photo of Grandad as young man and one of William, I am an artist by trade so it was a pleasure to create a lovely piece of art work with my family heirlooms.

I was having to travel alone with William ( 11) and Kitty (3) I am pretty good at travelling and I am always the lead when we go anywhere as a family. But Id never travelled abroad with the children with out my husband and we had never really split up as a family either. I was going to miss them all terribly and I was so sad they couldn’t join us on such an important life event for us.

(We are a large family, I married my husband 23 years ago and we have since have four children: Libby (18) not an ED carrier and was busy working, Grace ( 16) an Ed carrier but has just started at Leeds College of Art and it was too soon to take time off. Keith of course need to stay at home to look after them while I took William an ED carier and Kitty who we suspect is a carrier also.) 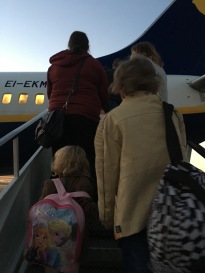 So the day came, The gift packed, the clothes ironed and stowed in my case, we set off to the airport. Landing in Rome we trundled excitedly though the terminal and straight out through security with no problem ( the joys of hand luggage) we jumped in our organised private transfer and enjoyed our ( rather hair raising journey) to the hotel.

The hotel, The Church Village, was a real contradiction in terms. The reception building was modern and bright, but the outside was typically Italian. Simple and reminding me of a youth hostel. I soon realised it was a hotel for pilgrims, a simple accommodation especially for those travelling to worship at papal mass. This brought home  the enormity of the trip and I really think William picked up on it too.

After a quick drop off of our bags, we set off to the bus stop. We were catching the bus into the centre to meet the other ED families at the vatican museum. As we arrived at the meeting place we saw a family who’s children obviously had the ED traits. We hadn’t even been to any of the gatherings with the ED group and therefore hadn’t come across anyone like us. It was quite a heart stopping moment as we approached them but within a few minutes we had been introduced to around 5 or 6 other families from around the world, all with ED and all excited to be on this trip of a life time.

We entered the museum and had a long wait while the tickets and passes were sorted out. It seems the Italians don’t have the same approach to organisation as us Brits, and although the end aim is always reached there tends to be some chaos and waiting around first. This turned out to be an on going theme of the week but it was endearing and kind of added to the atmosphere .

As we were waiting in the busy reception area, William started to flag. It had been a long day already, we had only flown in in the morning and now the hour and half wait was starting to take its toll. I made an executive decition to take William and Kitty back to the  Hotel and rest. After all we had a very big day tomorrow and we needed to ensure we had all our energy. Apparently the families had a wonderful time at the museum and we are still gutted we missed the Sistine chapel , but hey… we were going to see the pope  in the morning!.

We arrived back at the hotel, we grabbed a bowl of pasta in the reception, I had a beer and we bought ice creams to take back to the room. The kids showered and I managed to find an english cartoons channel for them to watch while I got everything ready for morning.

As I realised I needed an iron to give everything a once over, I called reception to find this basic of all hotels didn’t have one.. agh!!!! I ended up snuggling up with the kids while the shower steamed out clothes for morning.

We work up Early and excited, all dressed in our finery we made our way to the dining roo 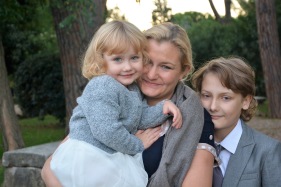 m for breakfast. What a shock we had to find the quiet hotel had turned into a buzzing mass of pilgrims,
Vicars, nuns and hundreds of groups proudly supporting the national colours huddled in groups everywhere we looked.

The atmosphere was electric as we grabbed our breakfast, we spotted some of the other ED families all dressed ready  for our special day.

After breakfast we gathered the gifts we had brought and met with the other families to wait for our coach. We took photos or each other and I was touched by the support everyone gave me as I struggled with the children and the pushchair. It was a hard moment, seeing all the families and I felt really lonely, missing the rest of our family. But the excitement took over and we settled on the coach on our way to the vatican.

As we arrived the crowds 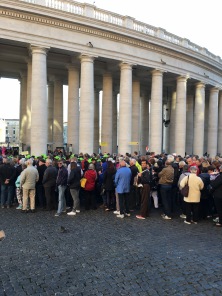 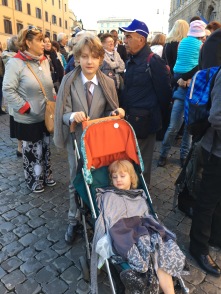 were huge! it was a daunting moment as we ( a large group) tried to stay together ( with the Italian lack of organisation) We had to go through a different entrance to the crowds, passing through airport style security and bumbling through to our area at the front of St Peters square.

I don’t really want to talk too much about the morning as it was simply so very special and been in the company of his holiness was emotional and wonderful. William and I were moved to tears and neither of us will ever forget it. no amount of words will explain the moment.

When mass started we were sat right at the front of the audience so we were really in the thick of it. But I had to have a little laugh at us all 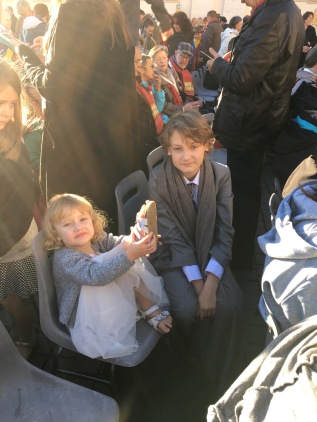 , as the sun creeped around to shine on us, I turned to see all the ED families frantically feeding the children water and stripping off their layers. Oh the joy of not been alone! For once in our life we were one of many.. what a wonderful feeling.

We came away from St Peters square emotional and hungry. Thankfully we were ferried back to the bus and driven out of the city to a farm style restaurant, were we enjoyed a wonderfully rustic meal in the shade of a barn. 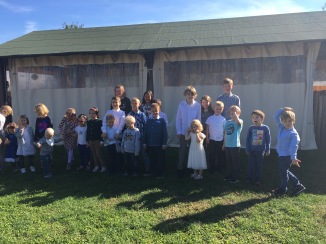 he children ran around the meadow together and parents were able to chat and share notes of how they were coping with the children with the condition. 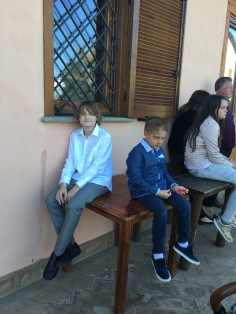 I learned loads! We have been coping alone since we got our diagnosis and it was great to hear from families with much more experience. We were coming away with lots of knowledge and support.

The day after our big day we spent the day exploring Rome, the kids and I grabbed a tour bus pass and we hopped on and and off the bus at the various sites. 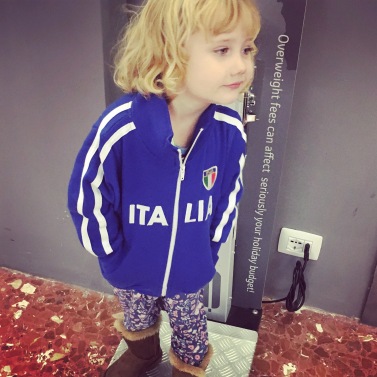 What an adventure!!! Not only did we go see the pope but we met so many other families from across the globe all like us. How wonderful it as for William to meet other children like him and to become the majority rather than the minority for a change.