So festival number three of the season… Truck festival 2016 in the heart of beautiful Oxfordshire in blazing sunshine.

After a relatively easy pack up ( thanks to our new system with pallets ) we set off down to Abingdon in Oxfordshire for the very first time. Truck festival was new to us and we were excited to discover exactly what this mysterious little festival was about.

We drove through the most glorious little village full of crumbling cottages and running roadside babbling brooks. As we had to wait at the railway crossing for the train to pass we marvelled at the tiny little road we, and all the other (even larger) rigs were having to pass down to the festival site. The road opened up to the most pucturesque farm buildings, pretty barns covered in grey woodpanelling   and  clambering ivy. Dust tracks wound between them and we crawled unsurely into site.

To say the production is laid back is an understatement! We were fourth or fifth of our team on site, and not one person has had to give a name or show Id. They were simply waved in and sent to what can only be explained as.. the arse end of the site!

As pretty as it was there was no doubt it was out of the main public arenas but we had been assured we would be signed up and folks would find us.

We set up tents and caravans for the night and bedding down ready to build the morning after. We were only providing a small space this weekend so with the whole team on it it was only a few hours work.

We work up to a bright and sunny day, we ambled about in pjs drinking tea and eating breakfast together as we waited for our pallet to turn up. 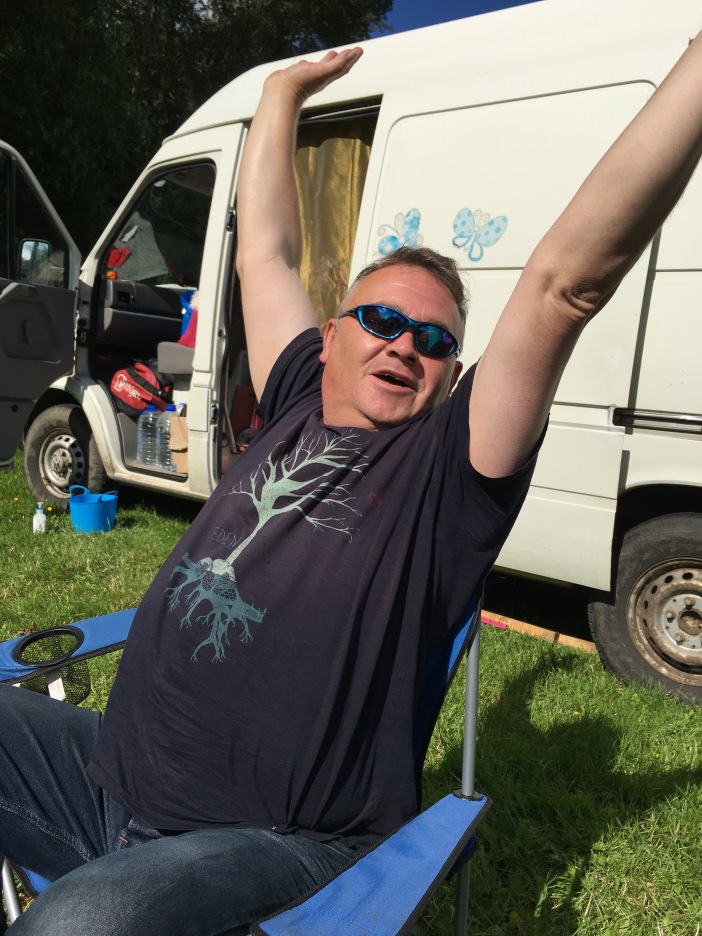 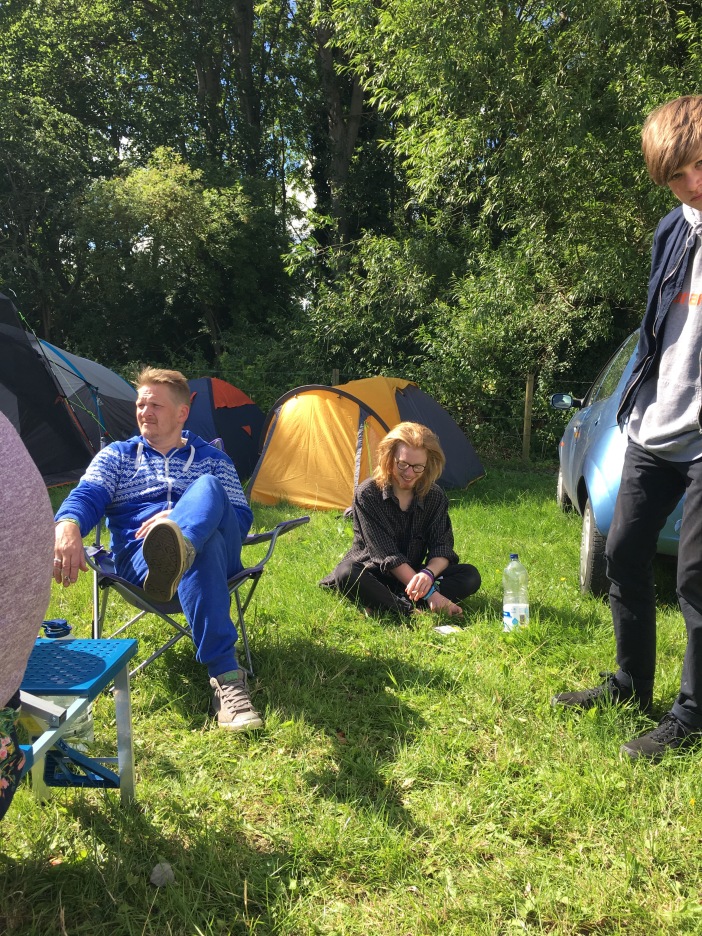 By mid day we’d emptied the van and Mr O and William left to go home. William had his leavers assembly the day after and although he’s felt poorly the last two days he was excitedly keen to attend. So we planned for daddy to drive the four hours home and leave Kitty and me here until Friday night.

As it transpired things were slow! We did get electricity pretty quickly but then it all stopped, as had no radios so couldn’t contact anyone, we had no water no toilets and no pallet! The pallet had the entirety of Angel gardens on it!

But we were ok, we lay around in the sun, the kids paddled in the little brook and played with the sand and toys we brought. The remaining crew all turned up and we simply had a very quiet day.. Waiting.

Eventually after much pestering at about 4pm and a lot of pestering it arrived , the crew jumped into action and by 7pm the space was ready! It looked lovely and we were ready for the off first thing. Punters were coming in at 10am so we imagined we’d start getting folk in by midday.

I enjoyed a lovely evening with kitty, we had an early is night, kitty had a bath and we watched cartoons together with snacks and cheese.. She fell into a happy sleep shortly after it got dark.

As I was enjoying the quiet I remembered we had new fairy lights. I could hear the crew outside laughing and sitting around the fire and though ‘oh I know, I’ll put some lights out.’

I was super Careful with lights, we had had a number of fairy lights for the space over the years and they hadn’t last well and we were never that happy about their safety. So we have invested with new ones, more expensive and much better made.

I unfolded them carefully in the caravan before pushing them out of the caravan window and plugged them in. As I went out Matt joined me to help me string them up, as I grabbed them to string them over the caravan all I remember was having this out of body experience as I saw myself fall to the floor screaming.
Fraser, Matt and Tara, were around me and I was covered in a blanket. I was shaking violently and sobbing uncontrollably unable to breath properly. I was in shock following a large electric shock!

My arm was numb and my hand was in excusiating pain. It took me a good hour to calm down and my breathing and body to return to normal, it was an awful and frightening experience. Needless to say the light went in the bin!

I woke up Friday feeling much much better. I remembered it was my birthday as Mr O phoned me to sing to me and remind me that I’d been born. I stumbled out of the caravan to host our first day meeting and after we’d done introducing ourself and chatting about the order of the day and what we were expected to provide,  the crew sang happy birthday and presented my with a wonderful hand made card with everyone signatures on it. I will totally treasure it. The children had made and decorated it and the mesages were lovely.

I remembered the years of never having a circle of friends that really and truly could be trusted and could actually be called real friends.. It hasn’t happened since uni and Angel gardens has brought that back to me, I’m very greatful and this gesture reminded me of my blessings.

We got to work and prepared for the punters to arrive, we were expecting 800 children…But strangely it never happened.. All day we had maybe four families in.. And they had told us how they couldn’t find us easily. So with some creativity, a number of signs were made and placed around, and by the time the production team had caught up and put up their own signs folks started to arrive. 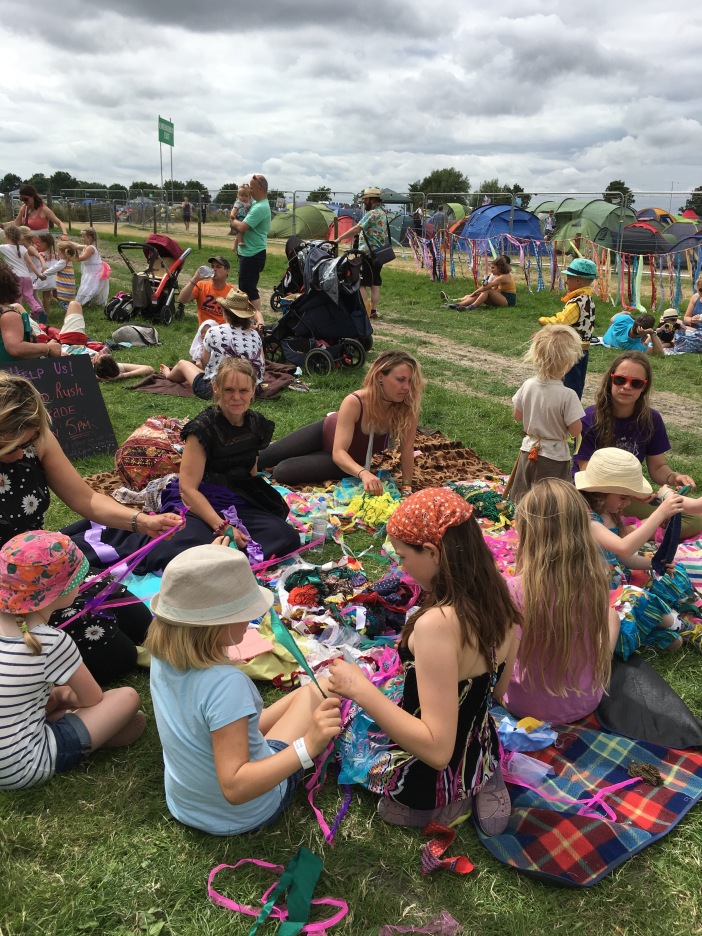 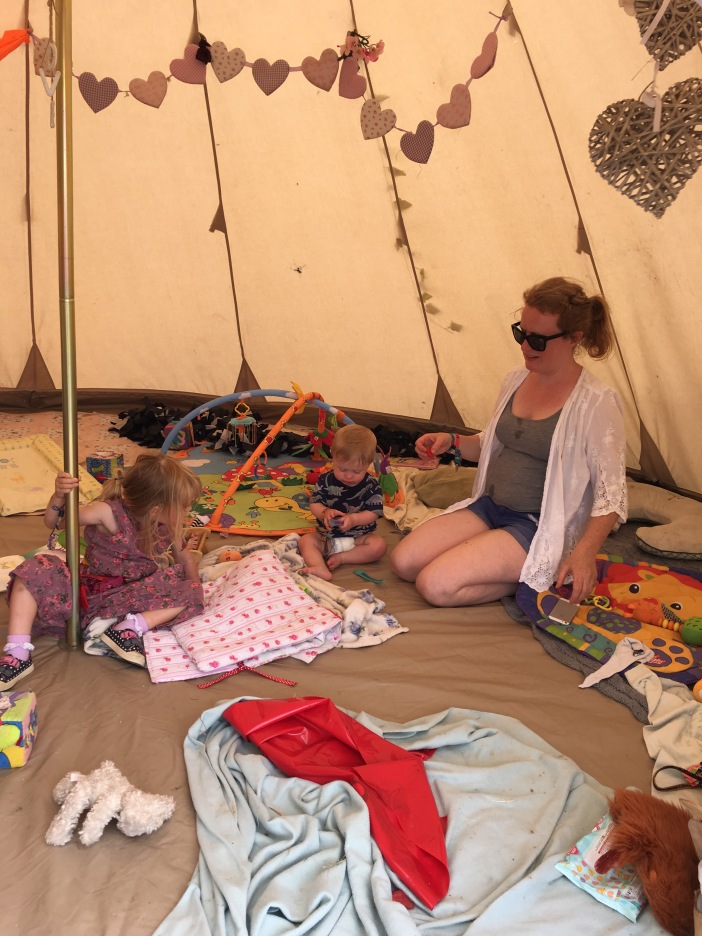 Friday night was lovely , Mr O arrived with the kids and they were carrying presents and flowers for me, we had cake and champagne and I opened my presents by the campfire with my friends and crew around me.

The highlight was doing the scratch card with Matt playing a backing track to build up tension we had a hilarious ten minutes playing the games and the utter group joy and hilarity as we won twenty quid!

Saturday came and cripes we were busy. They found us and we were packed all day . Crew were on form and we had a ball. We spent another evening around the campfire laughing and singing before exhaustedly falling into bed just after midnight.

Sunday was much quieter. This event is no doubt a Saturday event. Kids and families joined us but it certainly wasn’t as busy as the day before. But we had our parade and the kids caught the bad guy and collected pockets of gold coins with glee! 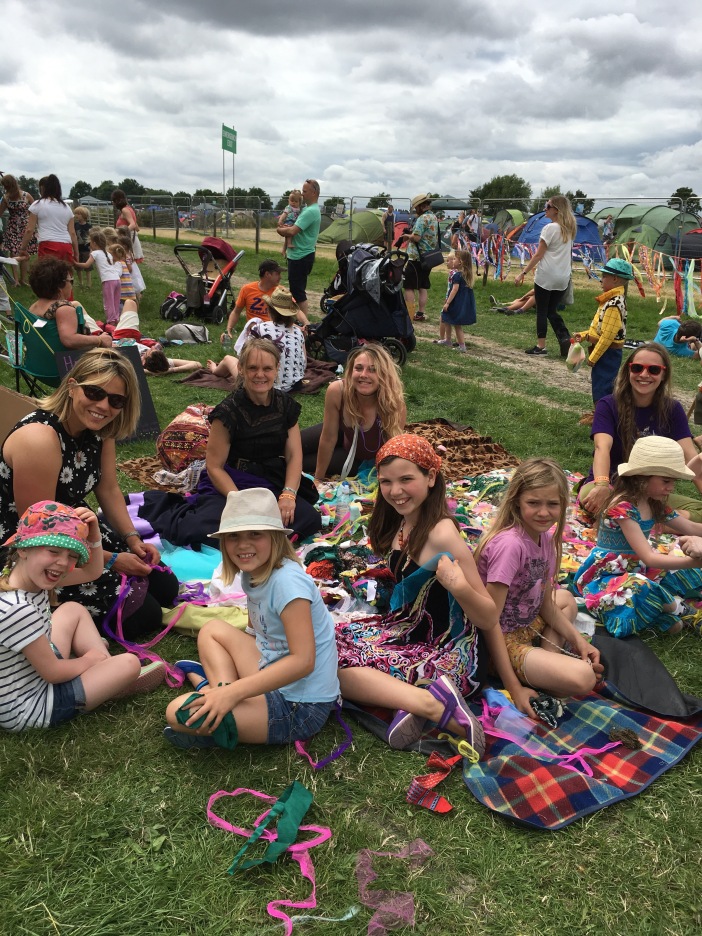 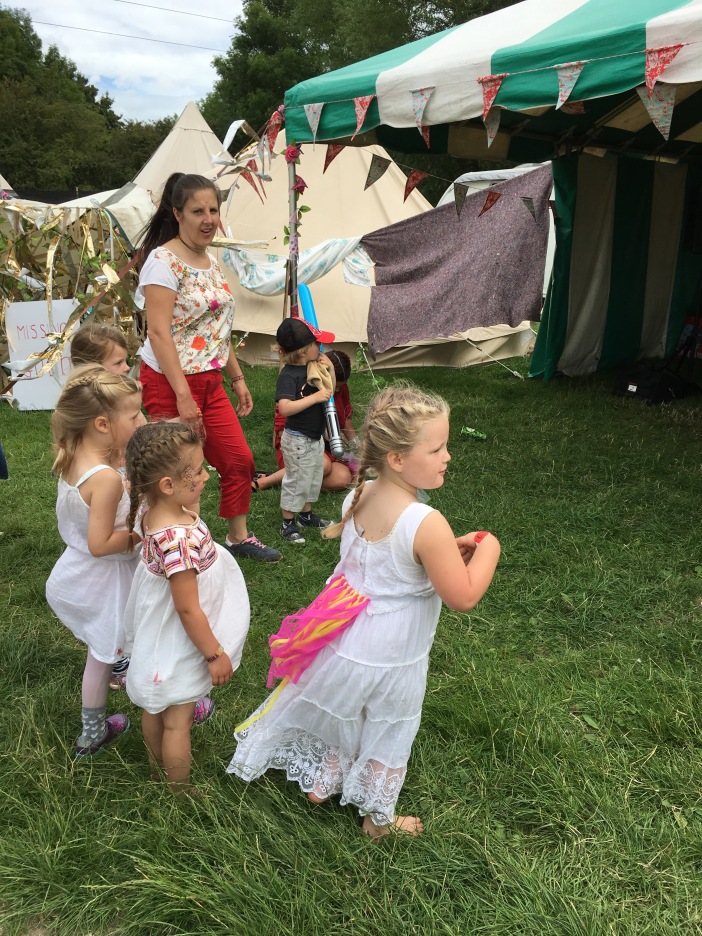 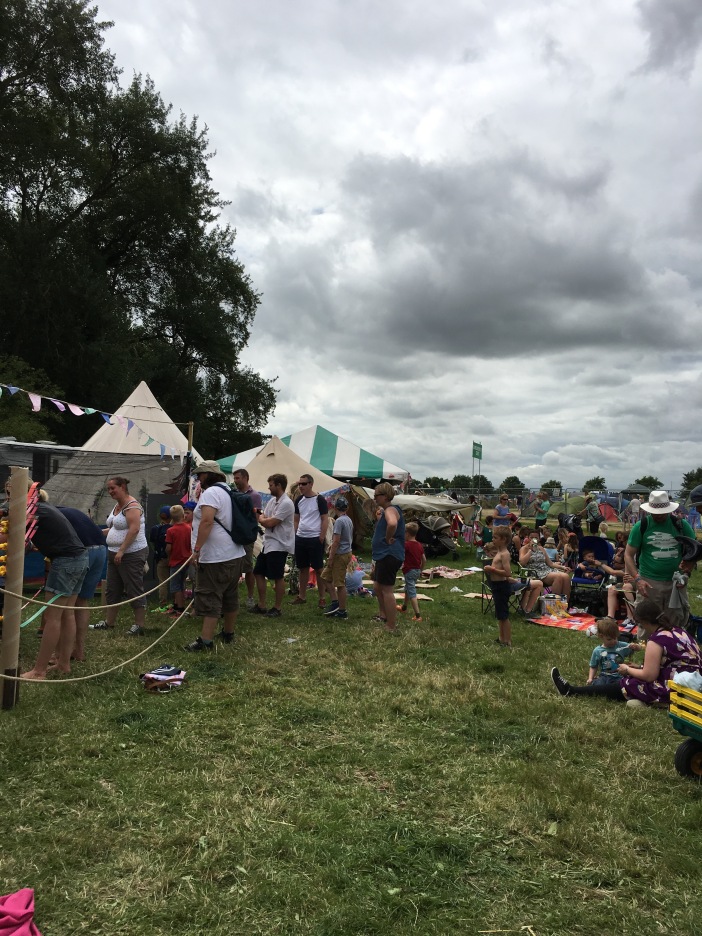 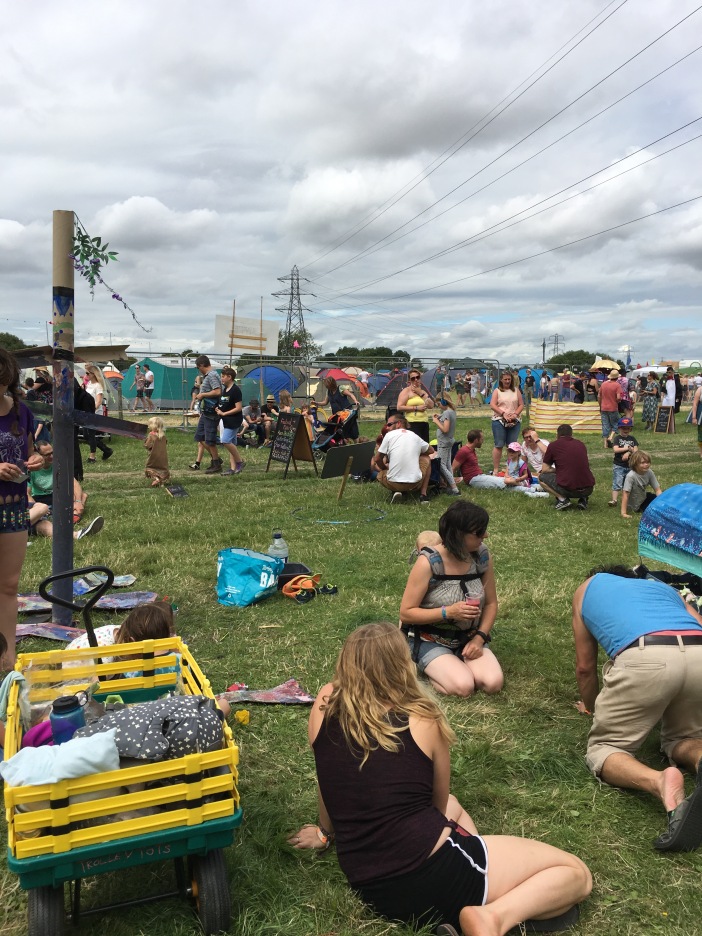 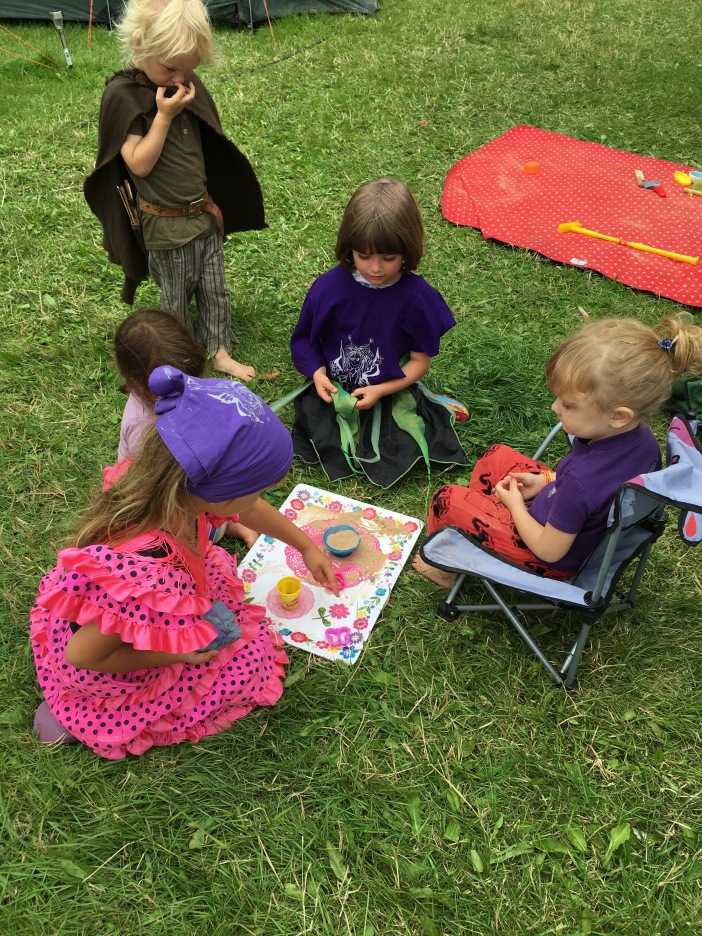 Come evening Grace was excited to watch one of her favourite bands. As I had a triple A pass, we went back stage and I went on stage during the set up to check if we could watch from the side. As I went up ( with William in tow) I saw my opportunity to get a great photo of the crowd from the stage. So I whipped out my phone and took a selfy with William . 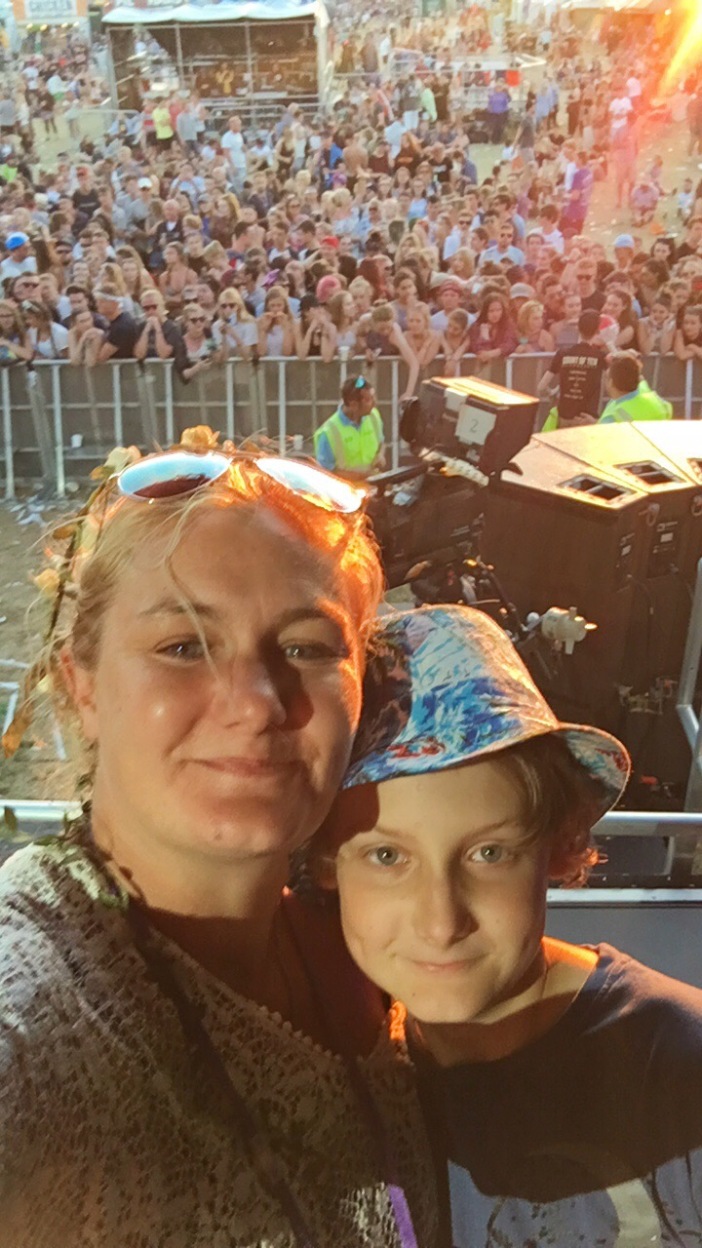 After we’d done, I turned to get my proper photo and saw the crowd were waving as I pointed the camera. I put up my finger to tell them to wait and pressed record as the gave us a huge cheer for the camera, much to Williams delight!

As we left the stage giggling, we told keith and grace and had a real giggle. So there we were at the side of the stage, Grace was thrilled as she filmed her band and danced and sung only metres from them. William and kitty loved it two, even keith had a ball.. We all did. 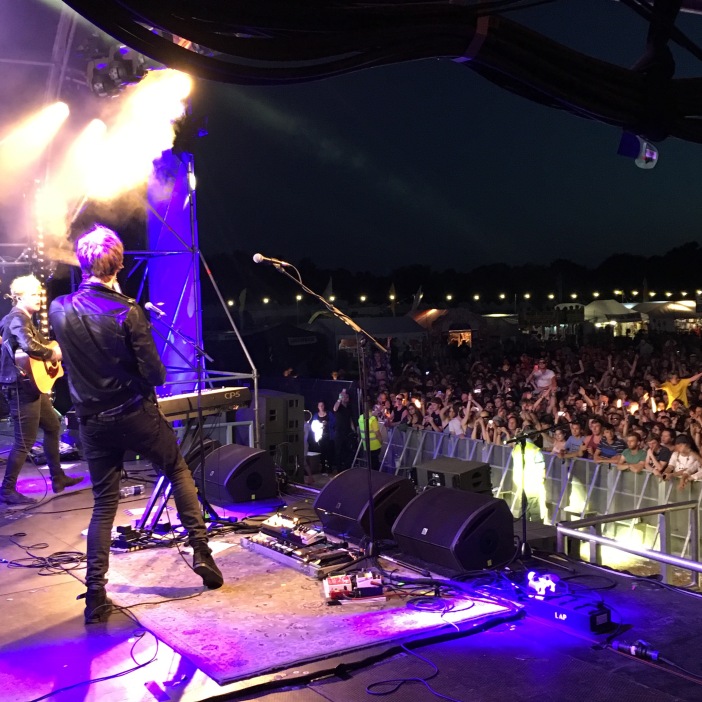 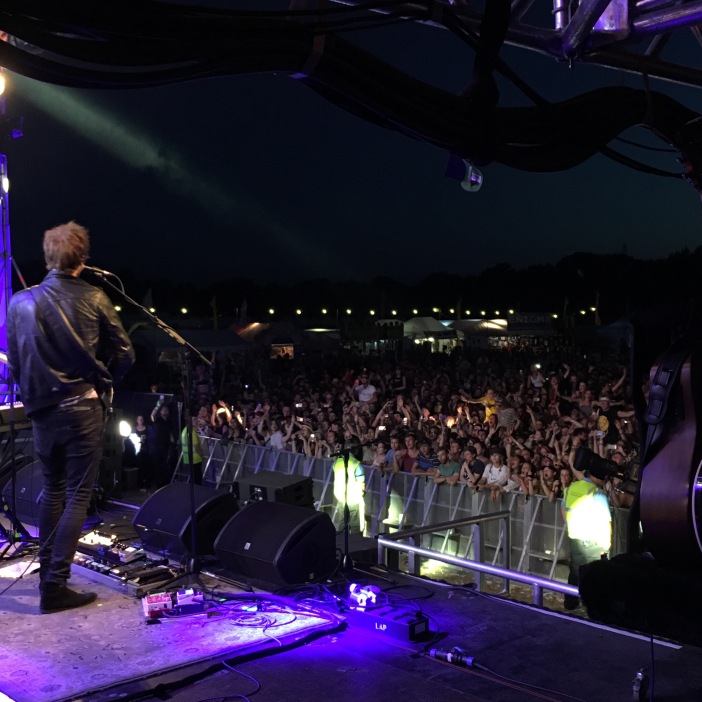 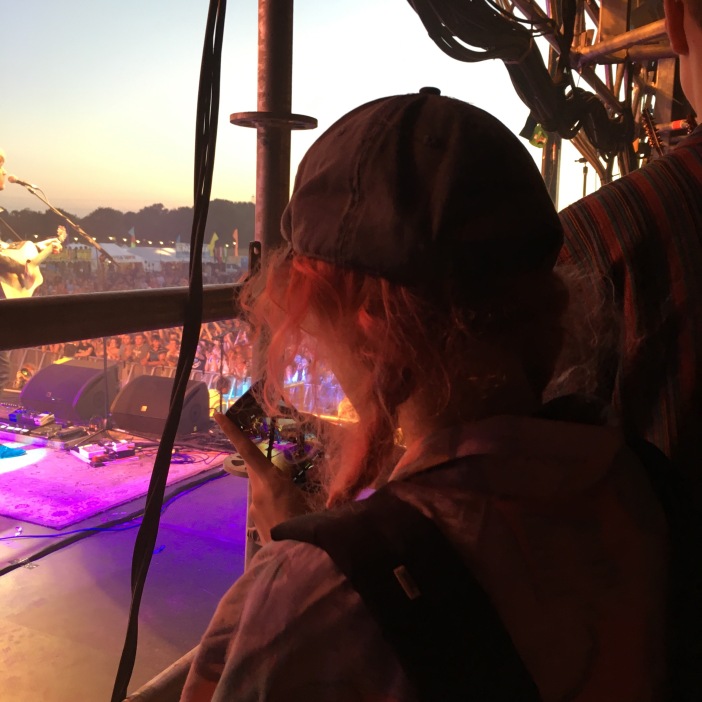 Grace came away with a song list and plectrum and met the band for photos. She was thrilled as the guitarist recognised her from the side of the stage and was totally sweet with her. They were genuine and gracious , much more than many other artists we have met before. I really was the hero of the hour.

We fell into bed and all chatted for a while before falling into a deep sleep. I woke up an hour ago and decided to write this before I forgot,.,

It’s been a lovely weekend… It was a small and intimate crew and we worked well together. We had another team at latitude and they smashed it there too! We were all great! 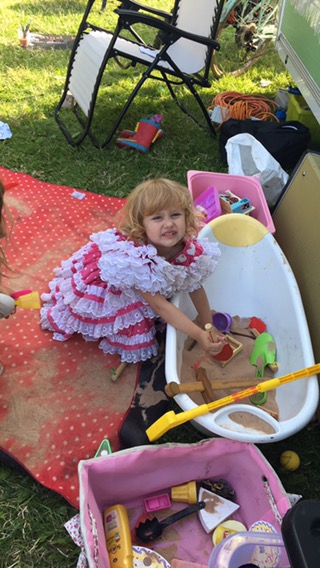 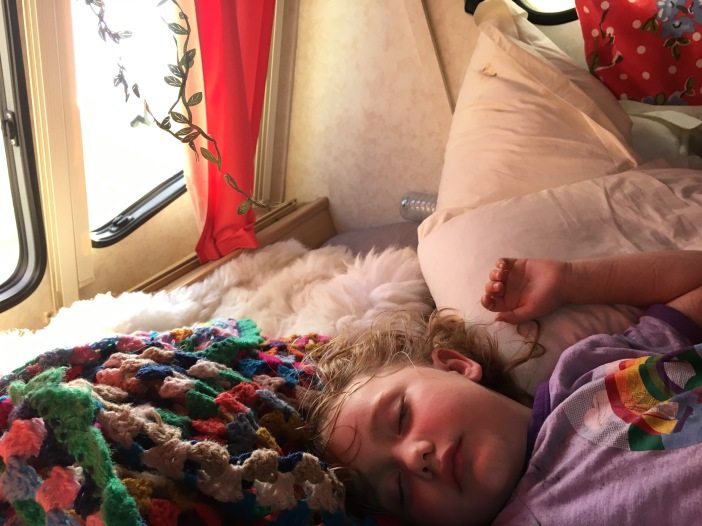 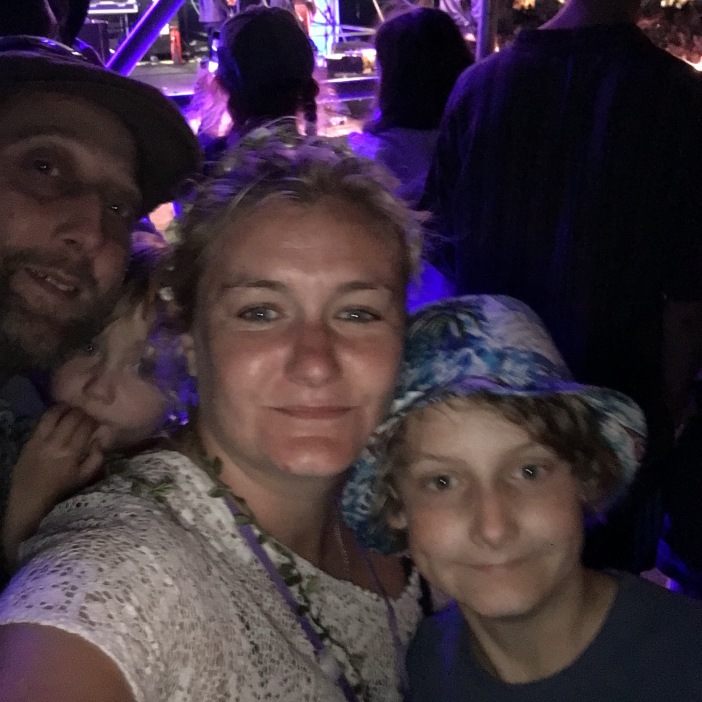 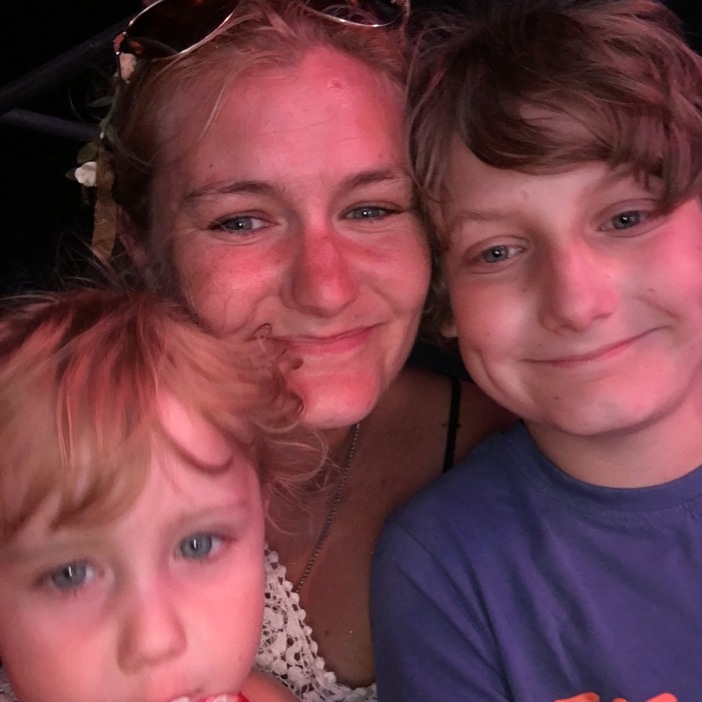 Not sure about the event, we smashed it and the vibe was lovely. Punters really enjoyed us and we had great feedback. Hopefull our clients get good feed back and we can help them develop the family side of things into the future now they can see our experience and what we can bring.

It was sunny, my kids had a great time, we had belly laughs and amazing chats. We did a good job too…and customers loved us..I really am a luck girl to own my life! 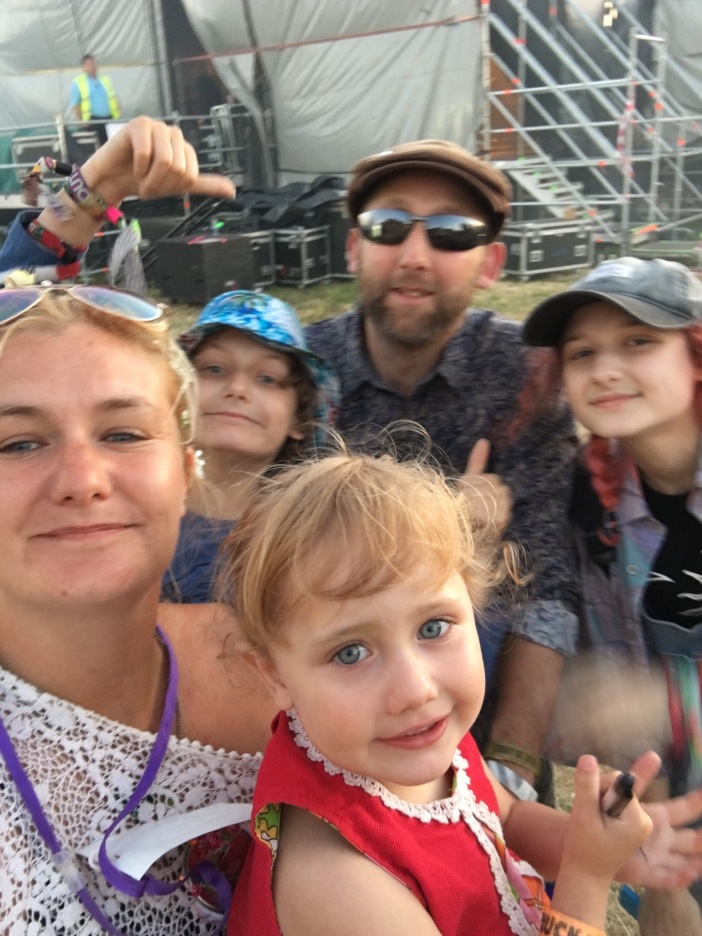